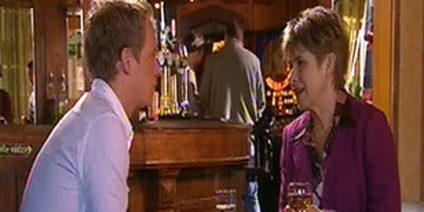 Matt flies into a panic when his mother, Susan, announces that she's just arrived at Rochdale station. In a knee-jerk reaction, Matt hastily removes all traces of his partner, Colin, from the flat and stuffs all of his belongings into bin-bags. What starts off as the day from hell gets steadily worse when Matt and Steph take some of the sixth formers on a work experience trip to Colin's workplace, hoping that they'll be inspired by his successful business and some of the young go-getters who work for him. Matt's totally distracted by his earlier encounter with his mum and tries to explain to Colin that he'd like him to move out for a few days. Colin's gutted, he can't believe Matt won't come out to his mother.

Eddie makes an early morning attempt to see how Jasmine is after hearing that no one has heard from her in over a week. He's still fuming about the situation and the prospect of losing such a good teacher - if only he could nail Michaela and her mates. Still, at least he can encourage Jasmine to fight the false allegations Michaela has made against her. However, Jasmine has decided she can't face it, not after seeing the doubt in Tom and Rachel's eyes - they clearly don't believe her version of events. She thanks Eddie for being the only one to believe in her, but sadly, it's not enough... she wants out of teaching for good and won't even return to Waterloo Road to face the Governors that evening.

At the school, Tom and Grantly arrive to find the place in darkness with all of the light bulbs removed. Wannabe eco terrorists Mika and Brett fess up, they've taken the bulbs to force Rachel and Eddie to take their plans to make the school greener seriously. Of course, their radical thoughts quickly turn to banning cars from the school, starting with Eddie's gas guzzler. Realising that the matter isn't going to go away, Eddie tries to turn Mika's radicalism to his, or rather Jasmine's advantage. He's heard from Tom that Mika has been a victim of bullying herself. If she can bring the subject to the attention of the school council, maybe he'll be prepared to take her green issues more seriously.

Matt's day continues to get worse as Maxine earwigs his heated discussions with Colin and sends a malicious text message back to the school, outing him. Even Janeece is disgusted by her best mate's behaviour - she realised Matt was gay ages ago, only she didn't think it mattered. As the kids prepare to leave, Chlo catches the eye of young entrepreneur, Dikram and he asks her out. Chlo's not sure - she still misses Donte - and turns him down. Just before they climb into the mini-bus, Colin tells the kids they shouldn't allow other people's opinions to discourage them from going what they want - a point not lost on Matt. Realising that, despite his many promises, Matt has no intention of coming out to his mother, Colin tells him their relationship is over.

Mika's still not sure about Eddie's deal, but a confrontation with Michaela in the loos makes her mind up for her. During the school council meeting, Mika outlines the problem to the other kids - if they stick together, maybe they can put an end to Michaela's bullying for good. Slowly, hands start to go up around the room. Eddie is over the moon when he receives a document detailing all kinds of incidents involving Michaela and her gang. They amount to a damning indictment that could very well save Jasmine. At the Governor's meeting, a worried but resolute confronts Michaela and her dad with the evidence the school council has collected. Although her dad is shocked, Michaela is dismissive - they can say what they like about her, it doesn't alter the fact that Jasmine assaulted her. To Eddie's dismay, the Governors are inclined to agree... that is until Jasmine walks into the room and stuns everyone with the news that Michaela's gang have finally come clean and admitted the truth. Now without a leg to stand on, Michaela and her dad quickly back down.

The word's already gone round about Matt and there's anti-gay graffiti in the loos. Dominic is caught red-handed, but Matt's taken aback when he confesses that he had to go along with it, or run the risk of the gang suspecting the truth... he's gay too. Things come to a head in Matt's class. The taunts prove too much for Dominic and he cracks. Humbled by Dominic's decision to out himself, Matt decides it's time to face up to his mother. However, he's devastated when he discovers that his mum already knows he's gay, and even worse, has known for years. She also discouraged Matt's late father from talking to him about it, something Matt knows he will find hard to forgive her for. Unable to face the reality of having a gay son, she leaves. Although upsetting, at least the confrontation has given Matt the opportunity to work out what it is he really wants. He asks Colin to marry him.

Hordley arrives in Rachel's office and hands over his side of the deal - an envelope containing the original newspaper cuttings of her past. Now that the air is clear between them, he's hoping that they can move on and asks Rachel out for a meal. She turns him down flat - now that their business is concluded, she wants nothing more to do with him. Meanwhile, Eddie is furious when he finds that his 4x4 has been vandalised. He goes to Rachel's office to call a taxi to take him home. Rummaging around, he finds the envelope Hordley handed to Rachel. Eddie's curiosity gets the better of him, but when he pulls out the contents of the envelope, he gets the biggest shock of his life...