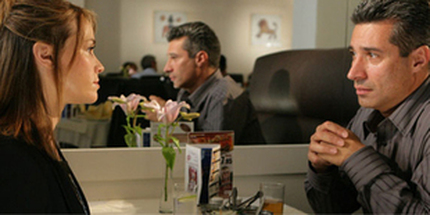 Its work placement week and Janeece is thrilled with the prospect of a week working in a museum. Maxine's not so happy; she's only got a week of mopping up after elderly people at Kirby Mills Retirement Home to look forward to. At the museum, Janeece is full of enthusiasm as she's equipped with a uniform, expecting to do all manner of exciting things - like reassemble dinosaur bones and give tours to visitors - but instead she's under the thumb of a gruff old museum guard whose only concern is to stop visitors touching the exhibits. After a few hours sitting in a chair, Janeece is bored rigid and hacked off. Deciding that working in a museum isn't everything it's cracked up to be, she locks the guard in a cupboard and runs off. However, her dreams of a lazy day skiving off are shattered when she's spotted by Rachel who arranges for her to finish off her work placement with Maxine at Kirby Mills.

The 'Lessons for Life' kids are being taunted and accused of being thick. After being caught fighting back, Paul tells Eddie that it's all his fault they've been labelled as sub-normal thickos. Tom and Eddie come up with a plan to give them more responsibility and make the kids Prefects. Unfortunately for Eddie, Bolton and Paul take their new responsibilities rather too seriously and dubbing themselves 'enforcers', they set about prowling the corridors and confiscating contraband. Meanwhile, Steph returns from her fund-raising trip to France with an expenses sheet longer than her arm but unfortunately, no cash. Rachel forbids any more foreign trips until Steph shows some results and then delivers a second body blow - Tom has performed so well as Head of Pastoral Care in Steph's absence that she's decided he should take over permanently. Steph is furious about the loss of status, not to mention her swanky office.

At Kirby Mills, supervisor Linda takes an instant dislike to Janeece and sends her off to change a soiled bed. Still recovering from the experience, Janeece is in no mood to be polite when one of the residents, Bessie asks for her help - she wants to visit a website about the Land Army and has no idea how to use the 'Interweb'. A bit of a rebel herself, Bessie immediately takes a shine to Janeece and her cheeky sense of humour and before long; they're bonding over Bessie's racy experiences during the Second World War. Things go awry however, when they hit the sherry, start dancing, and Bessie falls over. Linda is absolutely furious and Janeece retreats, humiliated - she's messed up big time yet again.

Today is the day the LEA will decide which construction company has won the big for Waterloo Road's new training centre. Rachel has no choice but to support her blackmailer, Stuart Hordley's bid, or face the consequences. Her heart sinks when she arrives at the LEA meeting just in time to hear Councillor Philby declaring that there's only one frontrunner, Ladmore Construction. Rachel finds herself desperately fighting to get the Hordley bid back into contention, and to keep her reputation intact. After Hordley takes her out to lunch in order to pile on the pressure, an overly anxious Rachel returns to the meeting. However, en route she overhears Philby on his phone - and it's clear he's taking backhanders from Ladmore Construction. Back in the meeting, Rachel plays her trump card, the kids deserve commitment and, in her opinion, Hordley's bid is the only one that ticks every box. If the bid doesn't go to his firm, she'll resign. Faced with Rachel's subtle hints about hearing him on the phone to Ladmore, Philby finds himself in a very uncomfortable position.

Janeece is ready to walk out of her job at Kirby Mills. She's had enough of people telling her she's a waste of space. Bessie listens to Janeece's rant about Linda and tries her best to calm her down. If Janeece really wants to prove Linda wrong, why not do the opposite of what she expects? If she's nice to her, she'll find it a lot harder to be horrible. Janeece takes Bessie's advice to heart and doesn't even make a murmur when Linda assigns her and Maxine the very challenging job of cleaning and changing a patient with severe dementia. Maxine immediately baulks - no way is she doing that - but Janeece stands firm, her heart going out to the poor woman who clearly has no-one to care for her. Linda is further surprised when she observes Janeece saying a fond farewell to Bessie... she'll definitely be back tomorrow.

Grantly overhears Davina admitting that she hasn't had time to prepare for his lesson and takes a great amount of pleasure out of humiliating her in front of the class - she's just a teaching assistant and that's what she should do, assist. Although she confides in Tom, Davina is angry when he tears a strip off Grantly - the last thing she needs is him fighting her battles for her. Later, she apologises and asks Tom if he thinks she'd make a good teacher. Tom is full of admiration and immediately offers his support - why doesn't she come over to the house so that they can go through her application for teacher training? However, sexual tension quickly overwhelms them and after agreeing that just being 'friends' isn't working, they end up in bed together. The course of true love never runs smoothly though and Tom panics when Mika arrives home unexpectedly. She's not amused by Tom's pathetic attempts to hide Davina underneath the duvet.

After a tough day, the last thing Rachel needs is to find a long line of pupils waiting outside her office, all victims of Bolton and Paul's overzealous approach to their new responsibility as 'enforcers'. At least there's some good news: Janeece is full of confidence after a day at Kirby Mills, and asks if she can spend the rest of her placement there. Rachel is impressed by Janeece's attitude, especially when she receives an email full of praise from Linda. There's also news from the LEA - Hordley's bid was successful. Rachel breathes a sigh of relief... hopefully now her secret is safe.