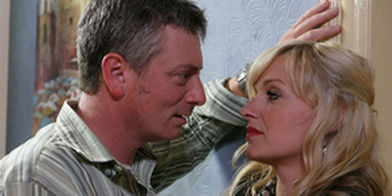 Following the parent's evening, Darren Brigg Senior turns up with flowers for Davina and the offer of a night out with him as a thank you for all of the hard work she's put in with his son, Darren Jnr. Slightly taken aback, Davina declines and cites heavy work commitments. Tom and Mika arrive in time to witness the encounter and Davina secretly hopes that Darren Snr's interest may spur Tom on. Davina greets him, assuming that Mika knows about them - wrong! Mika is disgusted at the thought of Tom seeing Davina 'Shagathon' and sounds off at Chlo - has Tom forgotten about Davina's fling with Brett? And anyway, Tom 'belongs' to their mum. Chlo sadly reminds her sister that their mum is dead... people have to move on.

Rachel is bemused when developer Stuart Hordley shows up at her office and makes a plea for her to reinstate his rejected bid for the contract to build Waterloo Road's new training centre. Rachel explains that she has no influence over the LEA's decision, but Hordley is nothing if not persistent. He's also come prepared and, much to Rachel's shock, he hands her a copy of the deed poll showing her change of name. It is becoming clear that Rachel has a hidden past she's been running away from... a past Hordley knows would mean the end of her career should it become public knowledge. She's got until the end of the day to telephone the LEA and get them to reinstate his bid.

Darren Snr bombards Davina with texts and, to Jasmine's amusement, she's forced into being firm with him, explaining that she's seeing someone and that they should limit their contact to matters that directly concern Darren Jnr. However, Darren Snr is not so easily put off and turns up at the school. Darren Jnr lets it slip that Davina hugged him in class and then immediately regrets it when his dad storms off to Rachel's office - here's a chance to get back at Davina for leading him on. Forcing his way into Rachel's office, he demands that Davina be sacked immediately for inappropriately touching his son. It's just another problem that Rachel doesn't need. Already riled from her confrontation with Stuart, she's less than sympathetic with Davina.

Rachel desperately tries to get rid of Hordley but he quickly ingratiates himself with the staff, especially with Eddie by asking if he can sit in on a 'lessons for life' session. To Rachel's horror, Eddie agrees - in fact, he's just heading off to a meeting, why doesn't Stuart join him? Morosely, Eddie, Jasmine, and Matt pass around some of the worst mock exam papers. The three teachers agree that the new scheme will at least ensure that the kids leave school with something, but what is the use in putting them through mock interviews and showing them how to write a CV when some of them can't even spell their own names? Its music to their ears when Hordley offers an office junior's job for the best candidate at that afternoon's mock interviews.

The kids are excited when they hear that there's a real job up for offer. Bolton in particular is showing uncharacteristic enthusiasm - it might only be a part-time, after school job, but it's a foot in the door and plus, he'll be able to use the money to help his mum, Candice, out with the bills. Keen to make a good first impression, Bolton pulls out all the stops and turns up at the interview in a borrowed suit. Already seething when she hears about Hordley's job offer, Rachel is deeply suspicious when he offers the job to an ecstatic Bolton. She's right to worry about Hordley having an ulterior motive - he knows all about the hard work Rachel has put in with Bolton and threatens to undo it unless she does what he wants. Realising she has no choice, Rachel picks up the phone and telephones the LEA.

Davina is still reeling from Darren Snr's allegations. She decides to take matters into her own hands and offers Darren Jnr a lift home as a means to confront his dad. Although she and Darren Jnr manage to convince Darren Snr that nothing untoward happened between them, it does nothing to cure the underlying problem. Darren Snr can't believe that Davina could choose a skint English teacher over him and begins to lose his temper, frustrated that she won't give him a chance. Davina tries to leave but Darren Snr refuses to let her out and locks the front door. She's trapped! In an attempt to gain control of the situation and negotiate her way out, Davina hits a raw nerve. Darren Snr completely loses it and is on the verge of attacking her when Darren Jnr bursts into the room. In floods of tears, he begs his dad to stop.

Tom and Mika have a heart-to-heart. He correctly guesses that Davina isn't the one Mika really has a problem with; after all, she's not the woman Brett cheated on her with. Despite everything that's happened, it's clear that she misses Brett... why doesn't she give him a ring? Realising that Tom has a point, Mika messages Brett on her computer and they arrange to go for a pizza. Meanwhile, Tom is surprised when Davina turns up at the house and asks him to go for a walk with her. He's furious when he hears about her ordeal at the hands of Darren Snr and offers to go round there and kick him into the middle of next week. Davina tells him to forget it, it doesn't matter, and anyway, hasn't he got enough going on in his life without fighting her battles as well? Mika and Chlo take up a lot of his time and she realises now that she can't stand in the way of that. Tom is suspicious - is this her way of breaking up with him? He's relieved when Davina tells him 'no', but she does insist that they take things slowly.

Rachel informs Hordley that she's done the deed with the LEA - his bid has been reinstated. She assumes that this means she's seen the last of him? Wrong! Getting him back into the running was only part of the deal. Rachel is aghast when Hordley tells her that he's relying on her to make sure that his bid is successful... or else...