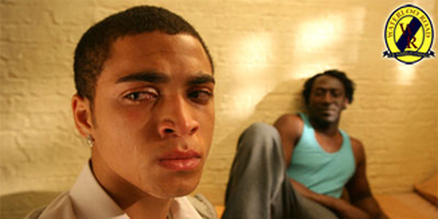 It's the start of a new spring term at Waterloo Road and Rachel, full of optimism for the New Year, is dealt a blow when she finds her office has been ransacked. At first it seems that the school has just been the target of vandals, but then Rachel discovers that the only thing missing is her personnel file. Meanwhile, as the rest of the school sit their mock exams, Bolton waits in the car park with the rest of his gang. Rachel is convinced that a day trip to a local prison could give them the scare they need to take school and their future more seriously. They are only 18 months away from joining the real world after all. Eddie, annoyed that the boys have gotten out of sitting their mocks, feels the trip will just fuel more apathy.

Bolton's well up for the prison visit and tells the rest of the lads that they're in for a treat - if it's half as cushy as the one his jailbird dad is banged up in it's going to be a right laugh - just wait until they see the gym and the sauna! He's also made a deal with Rachel that if he doesn't feel differently about school following the trip, he's free to drop out of Waterloo Road. At the prison, Rachel, Matt, and the lads are searched before being taken on a tour of G-Wing. Paul's disgusted when they get to sample the delights of the prison canteen - he thought Bolton said the food was top notch. As always, Bolton has all the answers - his dad doesn't eat crap like this, he gets the screws to bring Chinese takeaways in for him!

Back at the school, Eddie's concerned that the teachers aren't taking their duties as exam invigilators seriously. He makes a tour of the corridors and becomes more and more frustrated as he spots Jasmine listening to music, Grantly reading the Racing Post, and Tom and Davina flirting. But worst is to come when he discovers a dejected Karla, ejected from Grantly's class room after reacting badly to an unexpected exam question. Later, Eddie challenges the unprofessional attitude of his staff. It becomes clear that they're all nonplussed as to why the kids feels so pressurised - the exams are no way as difficult as they were when they were at school. Eddie throws a challenge by asking them to sit an exam after school, offering a bottle of whiskey to anyone who achieves a grade B or above. Convinced it'll be a walk over, they're all up for it... right up until the moment they turn over their exam papers and discover that they'll be sitting totally different subjects to the ones they teach.

At the prison, Bolton takes advantage of the mayhem caused by a vicious attack on Matt by a prisoner. Inmate Carlton hands him a little parcel and a delighted Bolton tucks it away in his pocket. However, he's found out when he and the gang are asked to submit to an exit search, and the drugs he's bought are discovered. Bolton is appalled when the Governor orders him to be taken to a holding cell and looks to Rachel for help. She shrugs - he's not a pupil anymore and therefore no longer her responsibility. Bolton maintains his hard man front as he's banged up, but he quickly crumples when he finds out that Carlton is his cell mate. Carlton's furious and accuses Bolton of grassing on him. Bolton is reduced to tears, terrified and begging to be let out.

Outside, Rachel finally comes clean to the lads - they've been had - the Governor, POs, and inmates are all actors! Paul and the others look on open-mouthed as a completely unharmed Matt strolls out. He smiles. Did they honestly think they'd be allowed inside a real prison? Although clearly shaken, Bolton shrugs off the news of Rachel's deception. Back at Waterloo Road, Bolton has regained most of his swagger and is still adamant that he's had it with school... that is until Rachel plays a DVD of CCTV footage that shows him crying his eyes out in the prison cell. Bolton tries to storm out, but Rachel stops him. Can't he see that if he puts as much effort into his school work as he does into maintaining his macho front, he'll go a hell of a long way? Jolted by Rachel's words, Bolton agrees to stay on.

Brett's trying everything he can to get his relationship with Mika back on track and uses the school newspaper as a way of reeling her in. However, Mika's wise to his game and once again tells him to leave her alone. Meanwhile, in the absence of Steph who is 'fund-raising' in France, Tom has been asked to encourage more parents to attend that night's parent's evening. He starts off by chasing Danielle whose mum is yet to turn up to one of their evenings. Later, it becomes clear why Danielle's been keeping her mum so tightly under wraps - she's deeply religious and insists that Danielle dress appropriately. Aleesha takes one look at her friend's knee-length skirt, cardigan, and unstraightened hair and is struck by an attack of the giggles. Realising that she's upset Danielle, Aleesha seeks her out and apologises. Why doesn't Danielle change at her house in the mornings rather than using the public loos in future?

Across the room, Davina is thanked by a very grateful parent, Darren Brigg Snr. Since she's been assisting Darren Jnr he's turned a corner and never seems to stop talking about her. Davina's flattered by the compliment and happy to have some recognition for all of the hard work she's been putting in. The evening gets even better when Tom takes Davina out for dinner. After a day of awkward moments between them, Tom tells Davina she's pulled. Meanwhile, after a long day, an exhausted Rachel senses she's not alone as she gets into her car. She's quick to dismiss the feeling, but as she drives away, a shadowy figure watches...