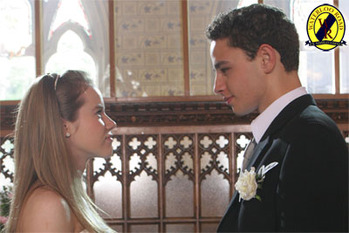 It’s a new term at Waterloo Road and following Izzie’s shocking murder, Jack and his new Deputy Head, Eddie Lawson are on air at the local radio station, promoting their new inclusion policy. Although he’s won a national bravery award for defending Izzie against her attacker, Jack secretly blames himself and is struggling to come to terms with what happened. Tom is also still reeling from Izzie’s death and blames Jack for playing the hero that night. Now a single dad to Chlo and Mika, Tom is about to be plunged into yet another family crisis. Chlo is planning to marry Donte and has been desperately seeking Tom’s approval and blessing. He’s refused to give it, but Chlo’s not prepared to wait any longer – the registry office is booked and she’s marrying Donte today after school.

Jack has taken on a group of gifted and talented pupils to improve the school’s exam results. He instructs Eddie to see to it that his G&T kids (Gifted and Talented) will be placed in the top sets, for everything. Jack’s clear, he wants these kids to have the best opportunity for no hassle, challenging learning. What he hasn’t revealed to Eddie and others is how he’s gathered the cash for this project. He’s been selecting and paying kids from good homes to come to Waterloo Road under the guise of helping one-parent families, diverting funds from an already stretched school’s budget, and by keeping local and not so highly performing kids out.

Steph is relishing her new position as Head of Pastoral Care, and has the power heels to match her more serious responsibilities. However, she’s wary of new pupil, Karla Bentham – she has Asperger’s Syndrome (a form of autism) – who Jack has gone out on a limb to admit. When Karla’s very late and weighty file arrives, Jack sees that she’s been excluded from previous schools for violence. He quickly doctors the files, knowing that Waterloo Road doesn’t have the support in place to deal with her Asperger’s and anyway, he’s spent the money elsewhere.

Young Newly Qualified Teacher Jasmine Koreshi arrives for her first day. She’s absolutely dreading her first class and is desperate for any advice the other teachers can give her. Grantly sees it as the perfect opportunity to palm off his most difficult pupils on her, and he and Tom take bets on how long she’s going to last. But the smile is wiped firmly off Grantly’s face when he discovers that he’ll be teaching Karla, minus support staff. Unsettled by Grantly’s ‘take no prisoners’ approach, Karla becomes more and more stressed over the course of the lesson. Grantly’s take on Karla is that she’s a little so-and-so and he’s having none of her lip, the end result being that he finds himself on the receiving end of a violent outburst. Grantly immediate calls an impromptu union meeting.

New G&T girls, Aleesha and Danielle, waste no time in phoning their parents about Karla and Jack is bombarded with complaints. Even worse, the teachers refuse to teach Karla and are ready to walk out unless they get decent support services. Of course, Jack can’t tell them the cash has already been spent on his G&T project. Underlying tensions burst through when Tom lets Jack know he’s sickened by him – a jumped up hero who couldn’t give a damn about his staff – and a punch-up ensues. Jack seeks a compromise by shifting Davina from support to work with Karla full-time.

Finally, we meet the new drama teacher Matt Wilding, late for his first day after his holiday flight back from Greece was delayed. He’s an instant hit with the girls, but unknown to them, Matt has a huge secret – an equally as fit boyfriend called Colin! Desperate to make up for presenting such a poor first impression, Matt promises a disapproving Jack a school musical extravaganza. Only problem is, now he’s got to write it.

Chlo leaves it right until the last minute to text Tom with the news that she and Donte have secretly taken off to get married. Tom races to the registry office, desperate to stop the ceremony, but Donte and Chlo are adamant, they’re getting married and there’s nothing he can do about it. Tom is forced to deliver an ultimatum; if Chlo is thinking of moving Donte into the house, he’ll move out. It takes Janeece to underline the seriousness of the situation the newlyweds have placed themselves in. How will they manage financially if Tom and his wage packet move out? It’s all too much for Chlo as she watches Tom prepare to move out of the family home later that day. Faced with her tears, Tom is unable to refuse when she pleads with him to stay…