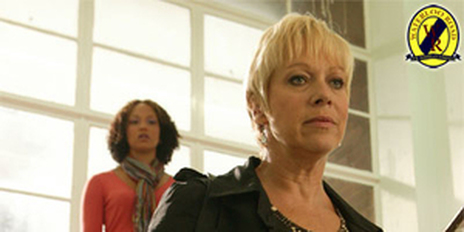 Today is the start of Year Eleven's work experience and one group are going to a local fashion warehouse. Chlo, Donte, Janeece, Maxine, and Noel gather in the assembly hall where Jack and Andrew urge them to make a good impression. Noel's not in the mood to listen to a lecture and instead, tries to push some drugs on Maxine who is already in trouble with Steph for borrowing a necklace without permission. When Maxine refuses to bite, he turns his attention to Donte and starts winding him up about his and Chlo's sex life... or rather their lack of one. Donte tells Noel he should get his facts right, or failing that, ask Lewis Seddon about the time he caught them at it. Unfortunately for Donte, Janeece overhears and doesn't waste any time in opening her big mouth in the corridor... at exactly the moment Izzie walks past.

Stacey returns to school after the attack and her dad, Terry brings her in to make sure she settles back in gently. He reassures Kim that Stacey is over her crush on Tom and ready to join her classmates on work experience. Before she boards the mini-bus, Stacey notices that Kim and Terry seem to get on well and starts to hatch a plan - she is desperate for a new mother figure, after all. Once at the factory, disaster strikes when the manager's purse goes missing. A bag search reveals that Noel has been pilfering stock and, even worse, the presence of the missing purse in Maxine's bag. The pupils are packed off back to school to face Jack's wrath. Meanwhile, Steph is furious that Maxine has spoilt it for everyone else... but has she got the full story?

Brett decides to ask Mika out but she's still convinced he's hung up on Davina and turns him down. Brett pours his heart out to Davina and she decides to intervene on his behalf, ordering Mika to get her act together before someone else snaps him up. After dancing around each other all term, finally it looks like Mika and Brett are finally getting together. But the course of true love never runs smoothly and Mika finds herself unwittingly putting her foot in it when she reveals to Steph that Brett and Davina used to be an item. It's music to spurned Steph's ears.

Izzie has been doing some detective work and has discovered that Chlo lied about staying over at her friend, Holly's house. Chlo admits to spending the night at Donte's house, and even comes clean about their plans to sleep together, but insists nothing happened. Izzie urges Chlo to wait until she's sixteen, and not to allow Donte to pressurise her into anything. Izzie is clearly concerned, but appreciates the fact that Chlo has been honest. Meanwhile, Donte is losing patience with Chlo's refusal to rush into anything and finishes with her. Izzie is furious when she witnesses the row and pays Donte a visit at home. She could cheerfully strangle him, but unfortunately, her daughter seems him be in love with him, and so it's up to her to give him the opportunity to see the error of his ways. Later, Chlo is delighted when she receives a texted apology from Donte, but that doesn't mean she's going to let him off the hook that easily.

Maxine continues to proclaim her innocence, but when she realises that no-one - not even Steph - is prepared to give her the benefit of the doubt, she finally cracks and admits to stealing the purse. Meanwhile, Kim is delighted when she receives a gift-wrapped box of expensive chocolates from Stacey's dad, Terry. However, when Kim thanks him, Terry quickly realises that Stacey must have sent them - she's so desperate for a new mum, she keeps trying to fix him up with eligible women. When confronted, Stacey admits to sending the chocolates and using the warehouse manager's credit card to pay for them. Kim races to tell Steph that Maxine is in the clear. But it's all too late for Maxine. Homeless once again, her druggy past is tempting her back - what's she got to lose now? It's a race against time for Steph who is desperate to make amends.

Lorna is thoroughly enjoying having Tom living with her and is delighted when he asks her along to watch the football with him - it's just like old times. After a post-match drink, Lorna chucks her medication in the bin and then makes a passionate move on him.