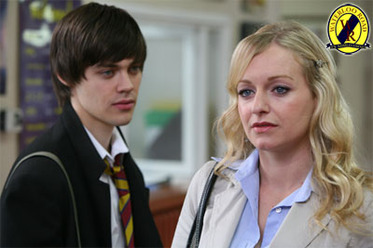 New trainee teacher, Russell Millen arrives at Waterloo Road School smart, keen, and ready to do his best on his placement. Having just left a career in the police service to join the teaching profession it would seem that Russell is ideally equipped to deal with even the rowdiest of pupils. Andrew takes Russell in his charge and is disgruntled to see the easy rapport he has with his old friend, Kim. It was Kim who persuaded Russell to retrain and she really believes he has what it takes. Russell is keen to impress and desperate to teach a class on his own. Andrew isn't convinced he's ready, and his reservations are proved well founded when Russell is forced to send a whole class to the cooler for misbehaving.

Jack and Davina's relationship is progressing. He wants her to move in with him, but Davina's keen to hold onto her independence and doesn't want to rush into anything. She's also keen to find a new challenge at work and asks Jack about the possibility of becoming a teaching assistant. Jack isn't keen on the idea at all - he likes having Davina all to himself - but can't come up with a good enough reason to turn down her request. Although she's still refusing to make her mind up about moving in with Jack, she has at least come to the decision that she can no longer carry on juggling him and Brett. She was stupid to think she would be able to have her cake and eat it. Understandably, Brett is upset when Davina blows him out and decides to confide in Mika.

Lorna is struggling to come to terms with having Multiple Sclerosis and is finding having Tom living with her reassuring. Tom has discovered he's looking at Lorna with new eyes - he's not only hugely grateful to her for putting a roof over his head, he's also amazed by how brave she's being in the face of her illness. But Izzie's not happy with how cosy Tom and Lorna are becoming and it's only a matter of time before the tension between the three of them is spilling over to into the classroom. After all hell breaks loose in a departmental meeting, Jack is forced to step in with an ultimatum - if they can't sort out their differences, one of them will have to leave Waterloo Road. Lorna volunteers, he'll have her resignation by the end of the day.

Mika wastes no time in confronting Davina and accuses her of stringing Brett along. Can't she see how messed up he is? Brett walks in and catches the tail end of the confrontation. He chases after Davina and tries to apologise. He desperately needed to talk to someone and he trusts Mika not to say anything. Davina doesn't want to hear it - she can't believe he's been so stupid, especially now that she has so much to lose. She advises Brett to stick to girls his own age in the future... like Mika for instance.

Andrew is concerned to see Russell emerging from an off license at lunchtime. He goes to speak to Kim about it, but she's quick to dismiss his worries as jealousy. Meanwhile, Russell has locked himself inside a toilet cubicle and is chasing swigs of vodka with Polo mints. Later, Russell spots a bullying incident in the corridor and loses it completely. As the fracas gets out of hand, his secret comes tumbling out of his bag... right in front of Andrew. Russell admits that he's an alcoholic, but pleads with Andrew to give him another chance - what happened in the corridor was a temporary moment of insanity and will never happen again. But Andrew remains firm, there is no way Russell can continue teaching at Waterloo Road. Andrew does however agree not to tell Jack and Kim about Russell's problem... that's something Russell is going to have to do himself.

Steph is quickly discovering the pit-falls of having a teenager in her house, namely being the subject of playground gossip. When Maxine starts wildly exaggerating her drinking habits to her friends, Steph finds that she's looking forward to offloading her charge to a proper foster family. But the Social Worker arrives with bad news - Maxine is over sixteen and therefore no longer eligible for foster care. However, there might be a place available for Maxine in a local Council-approved B&B. After work, Steph goes to inspect the B&B and is appalled by the terrible conditions. She goes straight home and orders Maxine to unpack. She can stay.

Over an after-work drink in the pub, Russell makes an announcement. In order to save face, he informs Jack and Kim that teaching just isn't stimulating enough for him and that he's decided to quit. Kim's initial reaction is to blame Andrew, but when she hears Russell's confession, she is forced to back down and apologise. In turn, Andrew admits that she was right to accuse him of being jealous of Russell. Kim is stunned and asks if they can start again. Could their relationship finally be back on track?