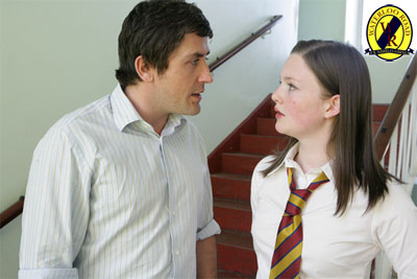 A week has passed since Izzie’s miscarriage, but Tom still hasn’t come clean about what happened with Stacey. He’s avoiding her like the plague, fully aware that he could lose his job if anyone found out about the incident. Unfortunately, thanks to Janeece and her big mouth, it isn’t long before everybody knows that Chlo and Mika found them in bed together. Janeece is worried. The police’s description of the attacker – average height, dark hair, and a local accent – fits Tom to a tee. And, as she goes on to tell Kim, if he’ll sleep with a pupil, who knows what else he’s capable of.

Tom finds himself hauled up before Andrew and Kim, neither of whom can believe he allowed the situation to get so out of hand. Even worse for Tom, Izzie is absolutely livid, not only because he kept her in the dark, but also for drinking when he was supposed to be looking after the kids. How could he be so irresponsible? As for Stacey, she swears blind that Tom didn’t touch her. Kim doesn’t believe her, convinced that Stacey is lying to protect the man she’s infatuated with. Andrew is all for suspending Tom pending a full investigation, but Jack overrules him. The only proof they have is classroom gossip, and that’s certainly not enough to risk ruining a teacher’s career.

Steph is delighted when Maxine returns to the school, dropped off by her mum’s boyfriend, Kevin. However, Maxine isn’t exactly over the moon with the situation, not least because she has so much missed work to catch up on. Kevin is also getting on her nerves. He’s much too over-protective, especially where her boyfriend, Lewis, is concerned. Kevin hates Lewis and the feeling is entirely mutual. After another confrontation by the school bins, Lewis decides that Kevin needs teaching a lesson and plans to ambush him on his way home from work. The plan fails when Kevin disappears into the park.

Stacey is walking home alone through the park when the attacker grabs her and drags her into the bushes. She fights back, managing to struggle away, and in a blind panic, she runs screaming through the trees, eventually coming face to face with Lewis. He claims to have been alerted by Stacey’s screams, but she doesn’t believe him and accuses him of being the attacker. Wishing he’d never bothered, Lewis watches Stacey flee. But then he sees Kevin. Lewis barely has time to warn Maxine before the police arrive to arrest him.

Down at the police station, Lewis proclaims his innocence, accusing the police of looking no further than his ASBO. He tells them that while they’re wasting time questioning him, Kevin could be out there attacking another girl. The police finally go to question Kevin, but he blatantly lies about his whereabouts and with Mrs Barlow backing his alibi, they come to realise that Lewis has been pulling the wool over their eyes. There’s no way that Maxine is going to let Kevin get away with framing her boyfriend, and when she finds a black balaclava in his rucksack, it looks like she has all the proof she needs.

Tom tries to make amends with Izzie by having dinner waiting for her when she arrives home. Izzie responds by ordering him out of the house. As far as she’s concerned, their relationship is over. Meanwhile, Jack has invited Kim and Andrew to join him and Davina for dinner, but their evening is brought to a premature end when Steph calls with the new about Kevin. Davina is furious with Jack for abandoning her in favour of Steph, but when she tries to make alternative plans with Brett, he ignores her and decides to call on Mika instead. Mika can’t believe his rotten timing. Someone up there definitely has it in for her…