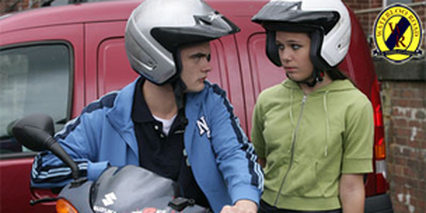 There is a serial attacker in the area and Celine, a Waterloo Road pupil has been assaulted. The police advise pupils on safety, while Kim sets up a self-defence class. But underneath her enthusiasm Kim is still vulnerable after Lewis attacked her last year, and Andrew's worried that the whole thing is affecting her a lot more than she's letting on. In truth, Kim is deeply affected by a home visit to Celine and resorts to private tears in her classroom. On top of all this, Kim also has to deal with Lorna storming into her classroom and threatening to slap her unless she keeps her mitts off Andrew. The reason for Lorna's erratic and possessive behaviour becomes clear when she admits to Izzie that she has stopped taking her anti-depressants.

Pupil Stacey Appleyard has developed a huge crush on Tom. She pouts and preens in his presence, but he's completely blind to the signals and doesn't catch on until she sends him a flirty text message. He believes he has dealt with it but Stacey misreads his reply, which fuels her interest even more. During the self-defence class at lunchtime, Stacey is quick to volunteer as a victim, anything to have Tom up close and personal!

Steph's new protégé, Maxine is considering returning to school, it looks like Steph's a good influence in her life. Grantly warns Steph against getting too involved, and she soon realises he may have a point when Maxine turns up on her doorstep and begs for a place to stay. Her mum chucked her out when she started taking drugs and refuses to take her back in case she annoys her live-in boyfriend, Kevin. Steph decides to pour oil over troubled waters and is surprised to discover that, far from being the monster Maxine described, Kevin is a pretty amiable bloke. He also seems to genuinely care about Maxine's welfare and jumps at the chance to have her back at home.

Mika is crushed when she finds out that Brett is seeing someone, although she'd probably die of shock if she found out the true identity of his mystery woman. With Roger away on business and Jack attending a residential course, Davina jumps at the chance of spending a whole weekend with Brett. But her night of meaningless fun is brought to an unsatisfactory conclusion when Jack sends her a text message. Brett is immediately jealous and threatens to tell Jack about their affair. Davina quickly loses patience with his childish behaviour and leaves.

Andrew is disturbed by Lorna's behaviour towards Kim and decides to cool things off between them, beginning by making an excuse when she asks to see him that evening. Andrew decides to ask Kim out instead, but she's still stinging from Lorna's verbal attack and once again, they end up at each other's throats. Meanwhile, Lorna's test results are back and she is told devastating news: she has Multiple Sclerosis. She is immediately in shock and denial; she didn't expect this and doesn't want to think about it. However, alone in her flat, her resolve breaks and after a bout of frantic cleaning, she calls Izzie and begs her to come over.

Stacey makes arrangements with Chlo for them to do their homework together and is invited to stay for the night. She's overly appreciative of Tom's cooking, something that doesn't escape the notice of Mika and Chlo, both of whom are becoming increasingly uncomfortable with Stacey's flirty behaviour and constant questions about Tom's relationship with their mum. Stacey can't believe her luck when Izzie goes running to see Lorna. Tom is furious - he can't believe Izzie is putting Lorna first again - and gets stuck into the red wine. After several glasses, he's out for the count and completely oblivious when Stacey climbs into bed with him.

The school car-park is dark and deserted when Kim finally leaves work. She's immediately on the alert when Lewis steps out of the bike sheds. He claims to be returning a bike, but she's sure he's up to something a lot more sinister and calls the police - could he be the attacker? Over at Lorna's flat, Izzie is devastated to hear of her friend's condition and promises to do everything she can to help. But the shock is finally starting to hit Lorna, and added to the rejection she feels over Andrew, it's only a matter of time before she loses her temper. Izzie tries to calm Lorna down, but is violently pushed away. She loses her footing and falls heavily on her stomach. Lorna rushes Izzie into hospital, but it's much too late for the baby