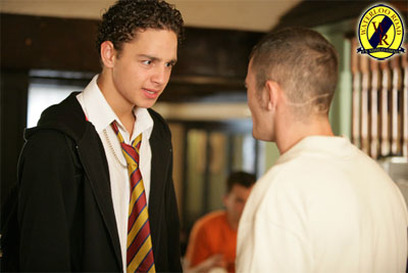 Donte and Chlo's romantic night is ruined when bully boy Lewis Seddon turns up on the doorstep and refuses to leave. When Donte does finally rid the house of him, he doesn't count on Lewis stealing a set of keys, or his drugged up girlfriend, Maxine's decision to ransack the place. Donte is furious when he arrives home - his dad is going to kill him! There's only one language thugs like Lewis understand and so Donte sets off with a rather large spanner to confront him at the restaurant. Lewis might be a bad boy, but with an ASBO hanging over his head, he's also a bad boy who's desperate to hang onto his job. He calls Maxine and orders her to return Donte's stuff to the restaurant.

Brett is still determined to win Davina back and decides to say it with flowers. Although she loves the attention at first, Davina is forced to put her foot down when Brett pays someone to release heart-shaped balloons underneath Jack's window. Davina may be quick at thinking on her feet, but she's not sure that her pathetic excuse about a mad friend with a fondness for playing practical jokes has quite put Jack's mind at rest. Brett is unrepentant, and not beyond dropping the odd threat about telling his father. Davina finally cracks but insists that if anything is going to happen, it will do so on her terms.

Jack and Roger are at loggerheads about the future of Waterloo Road when invoices for the new school building continue to go unpaid. Roger's son, Brett makes matters worse when he smashes the model of the new academy. Jack would love to expel Brett but his fantastic grades are raising the school's average and are great for the league tables. Kim and Andrew realise there's more to Brett's behaviour than meets the eye and end up on the receiving end of a startling confession and finally understand why Brett has such an edgy relationship with his dad. A week after his mum died, Brett caught Roger in bed with another woman.

With Roger refusing to change his mind about taking Brett out of Waterloo Road, Jack decides it's time to get some proper answers from Davina about where Roger's money is really coming from. This information comes in handy when Jack is called to physically intervene when Roger tries to drag Brett out of school. After a brief bout of fisticuffs back in Jack's office, Roger calms down remarkably quickly when he finds himself looking at a print-out Jack is holding, from a website called 'Big Baps'. It turns out Roger makes his money from porn! Jack has him over a barrel and Roger has no choice but to give into his demands. Andrew meanwhile is extremely uncomfortable with the whole idea.

Secretly Lorna's dizzy spells have been getting worse and her doctor books her in for an MRI scan. She's remarkably blasé about it all though and seems more concerned about the prospect of moving into her new flat. She enlists Andrew, Tom, and Izzie to help her move, thrilled things are finally falling into place, especially her blossoming relationship with Andrew. Later, they are both happily ensconced in her new flat. Could this relationship be going somewhere? Lorna is convinced that her life is finally back on track. Meanwhile her doctor is urgently trying to contact her.

Roger decides it's time he and Brett had a man-to-man talk. Although he knows that Brett will find it hard to believe, Roger reveals that Brett's mum knew all about his affair and hands him a letter from her to prove it. Brett is upset, but gradually comes to accept that what his dad is telling him is the truth. He decides he doesn't need to read the letter and gives it back to Roger. Meanwhile, Maxine is desperate. With no drugs and no money to buy any, she attacks a drunken Steph on her way home and attempts to steal her handbag. However, the mugging doesn't quite go to plan for either of them.