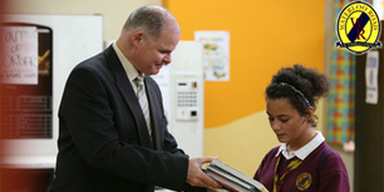 Lorna's death has rocked Waterloo Road and her two best friends, Tom and Izzie are devastated. But at least it seems that Lorna's last wish has been granted when Tom asks Izzie to marry him. Meanwhile, Jack goes to see Steph and, although it's clear the words are sticking in his throat, he apologises for not believing her allegations against Davina. Steph is insistent that Davina should be sacked, but as long as she and Brett both insist that their affair took place before either of them came to Waterloo Road, Jack doesn't have the grounds. Davina continues to plead with Jack for another chance, but he doesn't want to hear it, he's far too busy nursing his damaged ego, and seeing Brett's smug face around the school really isn't helping. Steph meanwhile vows to see off her rival for good... this is war!

Big changes are afoot at the school as the first clod of earth is cut from the ground in preparation for the building of the new Roger Aspinall Academy. Jerry Preston, a big bucks American has bought out Roger's business which means he's also bought his investment in the academy. It's all the same to Jack who's just glad they've still got a backer. As long as the cash continues to flow, he's even prepared to corral Kim and Andrew into forming a circle and joining Jerry in an impromptu prayer. Kim is worried about Jerry and his strong religious agenda, and when he starts encouraging Janeece to abandon her interest in dinosaurs in favour of Creationist ideology, it seems her concerns are warranted. Later, Andrew has his own theological discussion with Janeece and decides to look Jerry's organisation, UCOS, up on the Internet. He's shocked by what he discovers.

Big changes are also afoot in the school canteen, as Jack has instigated a healthy eating initiative. He has even persuaded Izzie and Tom to dress up as vegetables to promote it; anything to get the kids to eat their five-a-day! But when a burger van turns up and starts to dish out junk at the school gates, Jack's plan for the school begins to go awry. Lewis, Jed, and Ma Seddon are behind the enterprise and they are coining in cash as the kids queue up for burgers and bacon butties. Maxine is thrilled to see Lewis again, and impressed by his determination to make more of himself now that his ASBO has been lifted. Despite Janeece's warnings and an ultimatum from Steph, she agrees to start seeing him again.

Andrew is in turmoil, he has been offered a permanent job in Rwanda and they want him to start as soon as possible. He's not sure he can walk away from all his hard work at Waterloo Road and asks Kim for her advice. It's the perfect opportunity for her to reveal her true feelings and both of them know it, but instead, she urges him to go for it - it's a once in a lifetime opportunity he'd be stupid not to take. Later, Kim finally confesses all to Izzie, but although she's finally admitted to caring for Andrew, she's still determined not to get involved... even if it means losing him forever.

It looks like the Seddon's reign could be over when Jack creates a new rule, banning the pupils from leaving the school grounds during lunch and break times. Jack's rule has come just in the nick of time too because alarmingly, it's not just junk food the burger van is pushing to kids at the school gates. Lewis is giving away free samples of Ecstasy to selected customers like Courtney and Siobhan - anything to liven up their school day. Luckily, Kim is on hand when Courtney has a panic attack. She's convinced both girls are on something, but they're too scared of the Seddons to admit to anything. After a grilling from Jack, Siobhan's in desperate need of a pick-me-up and she takes another dose in the toilets.

As Jed and Gemma show Lewis their lab and unveil their plans to become the drug lords of Rochdale, Jack and Davina meet up for a drink and a proper talk. Jack is still hurt and angry, but after some soul-searching, he's willing to give her another chance. Davina is thrilled, but their celebrations are ruined when Andrew calls with some bad news: Siobhan is being carried off to hospital in an ambulance.