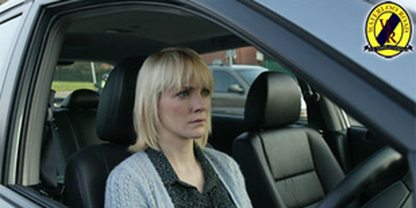 Lorna is desperately struggling to deal with the reality of her illness and is driving herself mad by researching its possible physical effects on the Internet. She's also finding it hard to deal with her emotions, and when a year group present her with a handmade card, it's too much and she walks out of school. As the other teachers form a search party, Andrew is peeved: they're short-staffed already, how could Lorna be so inconsiderate? Tom however, is worried - he knows she's fragile and, when he finds a hoard of painkillers in her desk, he begins to fear the worst.

Davina willingly steps in to help with the staff shortage and shows an aptitude in the classroom that prompts Tom to suggest she might want to take the role further. But Davina crashes back down to earth with a bang when Steph chips in with her opinion - would the children of Waterloo Road be safe? After all, hasn't Davina already had an affair with a pupil? Davina panics and goes to confront Brett only to be on the receiving end of a cast-iron denial. But if Brett didn't say anything, who did? The mystery is solved when Mika sheepishly steps forward and admits to unintentionally putting her foot in it with Steph. Brett promises Davina that he and Mika will keep quiet - and anyway, there's no way Jack's going to believe the word of 'stalker' Steph over Davina's.

Lorna returns from her trip looking radiant and renewed, she's been to a health spa to forget her worries. But she's not planning to stay long - life's too short for trivial things like working notice periods and she's decided that she'll be leaving today. Andrew and Kim beg her to reconsider, but her mind is made up... Waterloo Road will just have to cope without her. Before she departs, Lorna takes Izzie to one side and suggests a special weekend away, just the two of them. But unbeknownst to Izzie, Lorna has invited Tom along too... she's determined to get them back together.

Mika is delighted when Brett asks her out on a date, but his wealth is becoming a bit of a sticking point between them. Expensive chocolates and invites to VIP night-clubs don't impress her, especially when it's not even his own cash Brett is flashing. After being told off for turning his nose up at the Pot Noodle Mika is eating for lunch, Brett has a brainwave and invites her back to his place for beans on toast and a bottle of fizzy water. Mika is impressed by the effort he's made to make their evening a normal one... until he presents her with an expensive-looking bracelet. She's touched when Brett reveals that it belonged to his mother.

Drama queen Steph is unable to keep her secret any longer and drops her bombshell on a stunned Jack. He can't believe she'd stoop so low orders her out of his office. After spending the afternoon stewing on Steph's revelation, Jack confronts Davina. Unsurprisingly, she denies everything, accusing Steph of playing him like a violin. It's one malicious lie too many for Jack and he orders Davina to type a letter to the LEA informing them of his decision to suspend Steph for gross misconduct. However, Davina's conscience won't allow her to post the letter and she's forced to confess all to Jack. He responds by ordering her to pack her things and leave his house.

The country cottage is idyllic and both Tom and Izzie are looking forward to a relaxing break with Lorna... until they run into each other that is. Lorna pleads with them to suspend hostilities for the next couple of days - it may be a selfish request on her behalf, but she wants the three of them to have one last good time together, just like the old days. As the alcohol begins to flow, the awkwardness and tension begin to disappear and its business as usual for these three old friends. But all is not quite as it seems as Lorna says her goodnights - she's taken a massive dose of sleeping pills and has collected together all of the mobile phones and car keys so that Izzie and Tom can't call for help when they eventually find her lifeless body.